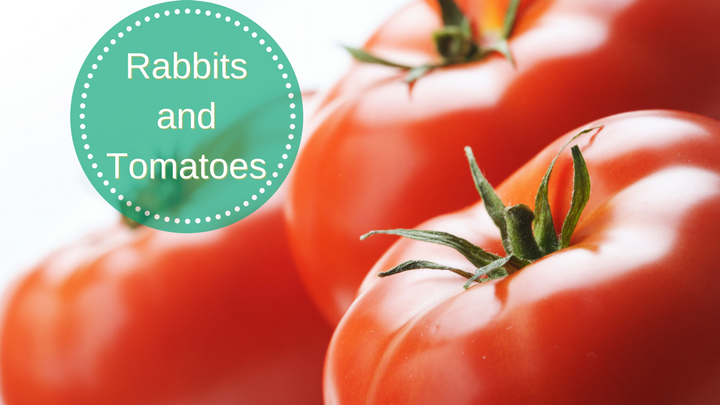 Of all of the herbivorous pets we can have, there aren’t many that can or will eat tomatoes. We may enjoy them thoroughly in salads, on burgers, or sliced fresh from the backyard garden, but that doesn’t mean they are safe (or palatable) for everyone. If you’ve got a bunny in your life, there are a few things you should know about tomatoes, especially tomato plants.

The actual tomato fruit is safe for rabbits. However, as you know, rabbits should eat fruits in moderation, and despite the decades-old argument about whether tomatoes are a fruit or vegetable, they’re fruit enough that they aren’t good for bunnies. Rabbits should have very little sugar in their diet, and even naturally-occurring sugar in fruit should be fed on a limited basis. Since this includes tomatoes, your bunny should only have small amounts of tomato a couple of times per week, maximum.

Are Tomato Plants Dangerous to Rabbits?

Yes! The actual tomato plant is toxic for rabbits, and if they eat large amounts, it’s possible it can actually kill your rabbit. There’s no minimum amount that causes toxicity in rabbits; some are fine eating large amounts while another rabbit could suffer quite a bit from just a small amount. What makes tomato plants (leaves and vines) toxic to certain animals?

There are two possible reasons, but neither has been definitively proven yet. The first theory is that the plant’s compound, tomatine, produces a substance called tomatidine when it’s broken down by the body. This mostly causes irritation in the digestive system, but there have been reported cases of death in certain animals, making it something to avoid in animals of all species.

The second theory is because of the alpha-tomatine compound. It’s found in every part of the plant, but it’s higher in the leaves and flowers. It’s at its highest concentration in young, green fruit, but the amount decreases as the fruit matures. Tomatine is slightly toxic to the heart, causing irregular heartbeats in moderate amounts, but it isn’t going to immediately cause the heart to stop or anything that scary.

Unfortunately, unlike dogs, you can’t induce vomiting in rabbits, so if they eat something that’s toxic to them, the treatment process is a bit more complex than it is in other household pets. If something isn’t good for your rabbit, avoid feeding that food and keep your tomato plants away from your bunny’s outdoor areas.

cialis without a doctor’s prescription

viagra over the counter walmart generic viagra – cost of viagra